(This essay first appeared in April, 2012, on a now-defunct service)

Bertram Wooster and Ernestine Anderson were staffing up their teams. Bertram was hiring trainees to work in the company’s retail stores, Ernestine was hiring software developers to build a new supply chain system for the company’s operations. ”Bert,” Ernestine asked, “I have hundreds of resumés, how do I whittle them down to a handful of calls and a few interviews?”

Ernestine tried that for a few weeks, throwing half the resumes out and the combing through the remainder looking for qualified applicants. She got nowhere, even if the people looked good on paper, when she talked to them on the phone it was quickly apparent that they weren’t capable of writing FizzBuzz. Meanwhile, Bertram was staffing up nicely.

Ernestine decided that she needed a new approach, so she went for coffee with Mark Fidrych to get his advice. Mark was the company’s CFO, and she worked closely with him on the company’s supply chain. Mark was also an angel investor on the side and he knew a little about the software industry. He nodded sympathetically when she explained that what was working for Bertram wasn’t working for her.

“Look,” he explained, “The essential difference between your situation and Bert’s is that Bert has a lot more qualified people applying for his positions. Sure, there are klunkers. But let’s say that half of the resumes he gets are decent. If he gets a hundred resumes and throws fifty away blindly, he’s still left with twenty-five decent ones on average.

Essentially, Bert’s problem is how to organize his time, not how to find good people. When you asked for his advice, you described your problem in the same terms, so naturally he told you how he does it.”

“But you don’t really have a how-to-organize-your-time problem, you have a finding a needle in a haystack problem. There are way fewer qualified people applying for programming jobs. If you get one hundred resumes, you might have no qualified people, you might get one, if you get two or three in a hundred you’re doing well. If you have one good person in a hundred and you throw fifty away randomly, you now only have fifty resumés to sift through, but there’s a fifty-fifty chance you won’t find anyone worth interviewing, much less hiring.”

Ernestine nodded. “So,” she essayed, “I need to be a lot more selective about the resumés I discard because I have a much lower signal-to-noise ratio?” Mark stared at her blankly, then laughed as he caught her meaning. “Right!”

Ernestine stopped throwing half the resumés away and started treating her job as one of finding that elusive one good person in a hundred. It took time, and she found herself making a lot of adjustments. 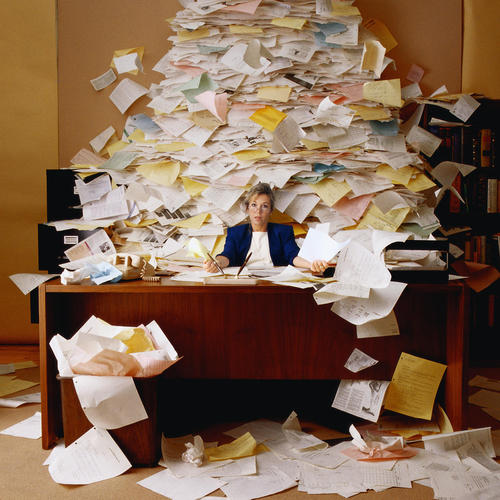 Ernestine and Mark left to found a supply chain management company. Their startup grew quickly, and Ernestine found herself in a meeting with Oscar, an unkempt but talented team lead she had just promoted. Oscar was holding a stack of resumés and he wanted advice about hiring. Ernestine smiled and told him about her experience trying to implement Bertram’s advice, and how Mark’s advice turned things around for her.

Oscar seemed a little grouchy. “That’s a nice story,” he said, “but what specifically did you do?” Ernestine smiled, Oscar could be brusque. “Well,” she began.

“First, I stopped caring so much about little things like how ‘professionally’ a resume was formatted or whether the cover email had spelling mistakes. I realized that throwing people away because of a spelling mistakes was really another way of discarding half the resumés because you don’t want to work with unlucky people.”

“Sure,” agreed Ernestine, “But all other things aren’t equal. What if the email with the spelling mistake came from someone who’s really busy because they’re talented and have a lot to do in their current position?”

“No way,” argued Oscar, “If they want to work here, they’ll take the time to check their spelling.”

“That’s true,” agreed Ernestine, “And if I had fifty great people, I want to speak to the twenty-five who want to work here before I speak to the twenty-five who aren’t sure. But if I have a pile with ninety-nine duds and one good person, I’m more interested in finding that one good person first and deciding whether they want to work here second.”

“The problem with filtering people by spelling mistake is that we’re making up a little theory about whether a spelling mistake tells us something important about the candidate’s abilities. Which would be fine if we didn’t have anything else to go by, but we do have something else to go by, we have their resumé and their code samples and we can call them on the phone and talk to them. So I ignore the little theories and go with what really matters.”

Oscar considered this. “Ok,” he continued, “What else?”

Oscar interrupted her. “Look,” he said, “University teaches you important things, things that are essential to doing your job. A degree is a requirement, and I don’t mean as a test of conformity.” Ernestine nodded. “Well, it’s true that nearly everyone we’ve hired has had a degree. But all the same, I didn’t sort resumes by degree or by school, I simply looked for relevant experience and reviewed the candidate’s code samples or portfolios when they had them to share. It turns out that almost everyone with the experience we wanted also had a University Degree.”

“But it’s dangerous to confuse correlation with causation. And especially dangerous to confuse correlation with necessity. If University is a great idea for a programmer, it will sort itself out when you look at their experience, look at their code, and interview them. I take the same approach to stuff like whether they blog or have hip hobbies like rock climbing. Most of our folks climb, mountain bike, or paddle, but I ignore that when looking at resumés.”

“After all, having the wrong hobby would be very unlucky. And I don’t throw unlucky resumés away.”

Oscar thought about that for a while. Ernestine continued. ”Obviously, we don’t ask people to share their social media with us. But I try to resist the temptation to read anything personal about a candidate, even if it’s public. I don’t want to be subconsciously prejudiced for or against them. It’s a disaster if I miss the one in a hundred because they’re a friend-of-a-friend and I can see on their Facebook that they espouse political views I abhor. That’s not only illegal, it’s bad for business.”

“I also don’t want to be prejudiced in their favour because they seem to be a like-minded soul. If there’s only one in two hundred resumes worth considering, quite a few people are going to be really nice people that nevertheless aren’t right for us. The best thing is to avoid reviewing anything that isn’t pertinent to the task at hand, which means code or words about code.”

“They can spout all they want about politics and Freedom Zero on their blog, but if I’m considering them for a job, I don’t want to know what they think about stuff like that, and I stopped myself from reading anything off-topic when researching candidates. As far as hiring is concerned, having compatible opinions is a question of luck, not qualifications.”

Ernestine was warming to the subject. “Another thing I did was start advertising in plain English. We tried placing ads for ninjas, rock stars, and so on, but I discovered this was the cultural equivalent of advertising for white males who drink dry martinis. Not that white males who drink dry martinis can’t do the job, but there’s no real difference between advertising for a Ninja and throwing half your resumés away because you don’t like unlucky people. Either way, you end up with fewer resumés.”

Oscar spoke again. “But what if the Ninja ad attracts more qualified respondents than the plain ad?” Ernestine smiled. “When you’re programming, how do you know which code to optimize?”

Oscar smiled. “I measure. Premature optimization is the—Oh, I get it!”

“Right,” Ernestine continued, “I measure too. And you ought to. Advertising for people is no different than selling things online. You track everything and measure everything. You A/B test. You run analytics. And you don’t throw half of your market away.”

“But,” Oscar protested, “You say our problem is finding that one person in a hundred or one in two hundred. How does being so damn inclusive help? We still need to reject ninety-nine people.”

“Ah,” explained Ernestine, “What I do is raise the actual talent bar higher to make up for removing all the other hurdles between a candidate and an interview. You shouldn’t reject people because they don’t look or sound like the last good person you hired, but you can and should reject people who can’t do the job. I don’t give anyone a free pass. I don’t care if they say they have Lisp experience and I heard them speak at RubyFringe and they let it drop that they were talking to Brendan Eich at Christian Jaekl’s wedding. I grill them, hard, on actual programming and actual software development.”

Oscar nodded. “Thanks,” he said, then hesitated. “Hey,” he said, “I think I just realized why you hired me when so many other places wouldn’t even give me a phone screen. Thanks a lot.”

“No thanks necessary,” said Ernestine, “You’re a great programmer and you’re going to be an even better team lead. You belong here. We’ll do great things together.”